The goal of the practical project in the third semester of the bachelor degree program Energy Business is that students gain independent knowledge and conduct scientific experiments with specialist and niche topics. Then they present the results by putting them into writing in the form of academic papers.

The project groups of the class that started in 2018 worked on their assignments from October 2019 until the end of January 2020. In February, both groups of students presented their final results to their project clients. 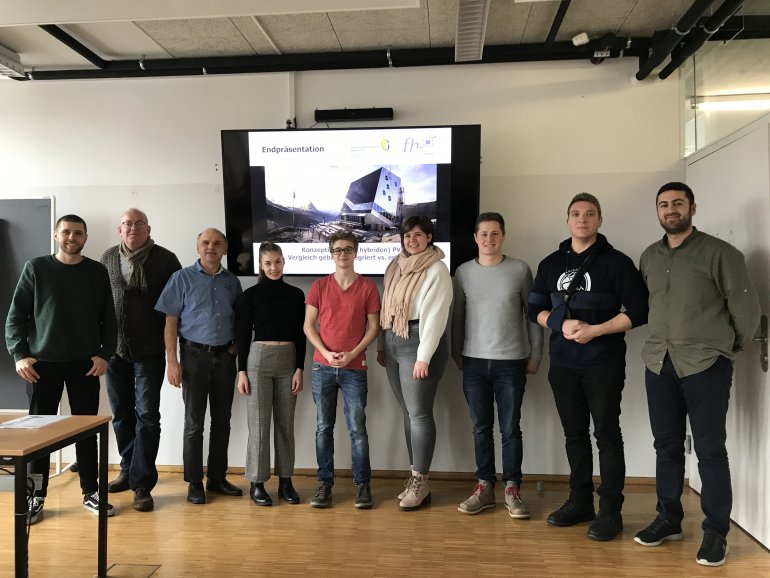 The practical project group with the Bavarian Association for the Promotion of Solar Energy who commissioned the project.

During the practical project, the group of students under the guidance of university of applied sciences professor Dr.-Ing. Wolfgang Woyke and Deniz Aksel, BA, examined the draft of a photovoltaic (PV) system to compare systems integrated into buildings versus systems optimized for output. A concept was to be developed during the planning stages to find out how typical effects optimized for production in PV systems integrated into buildings could be reproduced and compared. In individual project steps, market research was made on the topic before a concept was developed for a test system and multiple simulation calculations were made with an online tool in the second part of the project.

At the University of Applied Sciences Kufstein Tirol, a concept was developed for a cube-shaped test system and possible spaces for installation were examined on the roof of the FH building. To do so, the lateral surfaces of the cube-shaped test system were equipped with PV modules, and all four sides of the system were considered for the points of the compass to simulate PV systems integrated into buildings. This provided the opportunity to test how strong the output of PV modules was and to test influencing factors from the surroundings. A simulation of an optimally aligned and elevated rooftop installation on the top surface of the cube served as a comparison. This practical project helped create an awareness for this important topic and should show the high potential of the building-integrated PV (BIPV) system.

The student group presenting in the market town of St. Johann in Tirol.

On behalf of the market town of Sankt Johann in Tirol, the students with the help of Philip Egger, MA, evaluated potential sources of waste heat from companies based inside the municipality and classified these companies into industries. The focus was not only on the technical potential but also on creating a concept for making contact with potential companies. Like with the parallel group, the project plan began by searching the literature to determine typical processes and temperature levels in individual industries. The result was a register of industries with some very promising industries that the students hypothesize have waste heat potential.

The intermediate results were presented to the city council in St. Johann, and it was pointed out that the classified companies are to be contacted in an additional practical project in the coming summer semester to specify the waste heat potential in further detail. In the final analysis, companies are to be shown the economic and ecological potential of using the waste heat that is incurred in their operations. It is possible to feed this heat into the district heating network of the utility company Ortswärme St. Johann as well as to use the waste heat within the company that produced it. It was important to the students to set a standard to be able to jointly obtain the best possible result with all participating players.